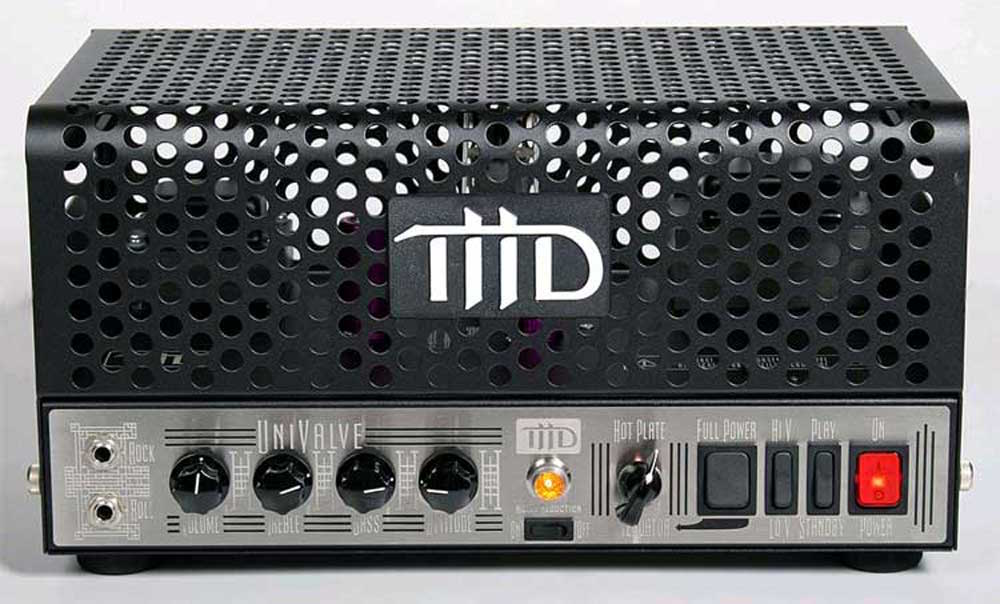 The UniValve delivers tones from smooth and clear to very aggressive overdrive.

The UniValve is easily capable of driving a 4 x 12 extn cab, and makes an ideal easily portable gigging amp.

Full description of the Univalve Head below clips….

Bill Lyerly #1 with a PRS EG III, into the Rock input of the UniValve with a Phillips 6CA7. EH12AX7. Speaker is a Celestion Silver Series.

Bill Lyerly #2 with a PRS EG III, into the Rock input of the UniValve with a Phillips 6CA7. EH12AX7. Speaker is a Celestion Silver Series.

Andy Marshall with a Patrick Eggle with Fralin PAF humbuckers into the UniValve Rock input.

Robbie Angelucci running the Univalve into a 1×12 cab, from ‘The Author’ Album – guitars: Strat and Les Paul

The THD UniValve is a Single-Ended Class A amplifier head with a single output tube that can be switched at will among many octal-based power tubes for different tones without re-biasing the amp. Useable tubes include 6L6, EL34, 6550, KT90, KT88, KT77 and KT66.
With the amp in “LoV” setting you can use 6V6 for a total output of 5 watts (see tube/power image). Alternatively, a special UniValve Yellow Jacket™ Converter is available allowing the UniValve to use the popular EL84 power tube at a total of 4 watts output power, also in “LoV” setting.
Likewise, the two preamp tubes can be any combination of 12AX7, 12AT7, 12AU7, 12AY7 or 12AZ7.

The UniValve delivers tones from smooth and clear to very aggressive overdrive. It is easily capable of driving a 4 x 12 cabinet, yet is quite small and light. It has a built-in Hot Plate™ Power Attenuator that allows for full output distortion at almost any volume.

Class A amps sound great at low volumes, and even better as you turn them up. So with the relatively low wattage of the UniValve you can turn up the amplifier to take full advantage of its stunning output distortion tone without deafening anyone.
Being single-ended, the UniValve has more harmonic content to its overdrive and distortion, full and rich in both even and odd harmonics, unlike the push-pull configuration that most amplifiers use, that cancels out even harmonics, leaving only half of the sonic spectrum.

The wide choice availability of power tubes enhances the player’s tonal choices, while only needing the one amplifier to acomplish this…

The UniValve also has a GREAT- sounding transformer-isolated line out on the back panel complete with an adjustable level control and a switch to choose Line, or Instrument-Level signal.