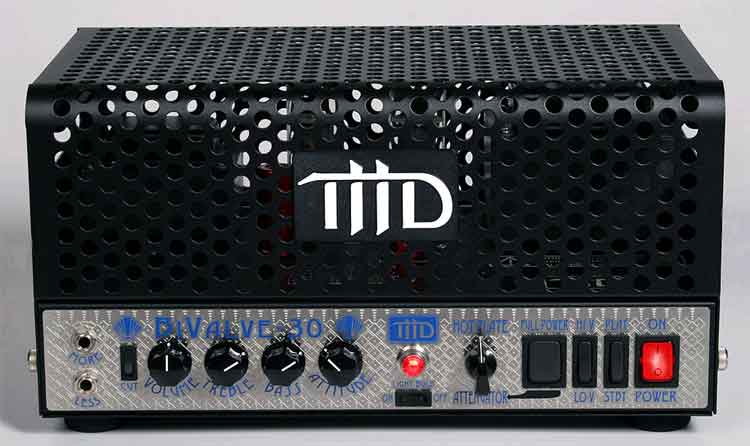 The THD BiValve-30 is a Single-Ended Class A amplifier head with two output tubes that can be switched at will among many octal-based power tubes for different tones without re-biasing the amp. Unlike any other amplifier on the market, the BiValve-30 gives each power tube its own cathode-bias circuit and its own transformer winding.

This permits the BiValve-30 to run two completely different tube types, creating a new dimension in tube amp sounds. Useable tubes include 6L6, EL34, 6550, KT90, KT88, KT77 and KT66. With the amp in “LoV” setting you can use the 6V6 power tube for reduced output power.
BiValve-30 Yellow Jacket™ Converters are available, allowing the BiValve-30 to use the popular EL84 power tube, also in “LoV” setting.
Likewise, the two preamp tubes can be any combination of 12AX7, 12AT7, 12AU7, 12AY7 or 12AZ7.

“… the BiValve 30 – running a 6550 and an EL34 – produced a level of tonal complexity and sonic dimension that was simply off the scale. The BiValve 30 could easily be the richest, most detailed amp in its class…”
Guitar Player Magazine May 2002

The BiValve-30 exceeds in versatility and harmonic richness, delivering tones from smooth and clear to very aggressive overdrive. At 30 watts Class A it is an amp well suited for stage use, yet is quite small and transportable. It has a built-in Hot Plate™ Power Attenuator that allows for full output distortion at any volume.

What is Class A?
Class A is a term given to an amp that runs its tubes at full current all the time, unlike most tube amps that alternate between running one tube/tube set and then the other tube/tube set…

Being single-ended, the BiValve has more harmonic content to its overdrive and distortion, full and rich in both even and odd harmonics, unlike the push-pull configuration that most amplifiers use, that cancels out even harmonics, leaving only half of the sonic spectrum.
The wide choice availability of power tubes enhances the player’s tonal choices, while only needing the one amplifier to acomplish this…
The BiValve also has a GREAT-sounding transformer-isolated line out on the back panel complete with an adjustable level control and a switch to choose Line, or Instrument-Level signal.